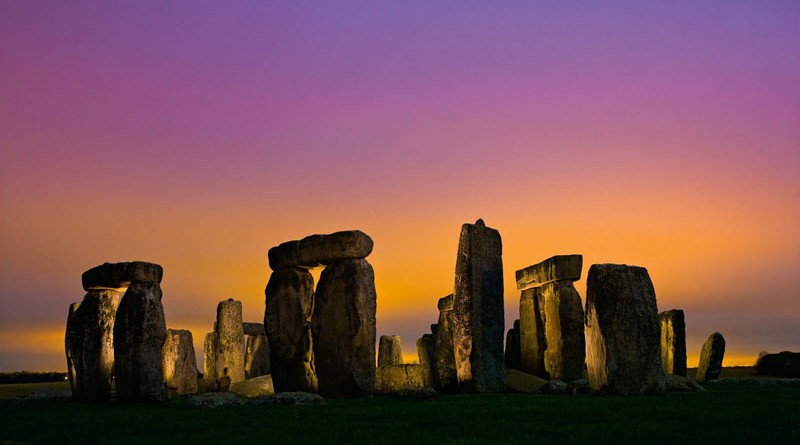 The greatest unexplained sites of Europe is England’s Stonehenge, believed to be more than 5000 years old. It’s impressive up close, yet no one knows why it was built. Speculation ranges from astronomy to computer to alien spaceship docking station to human sacrifice. The most recent theory is that it is a giant female sexual organ – a symbol of fertility. Unfortunately, the stones are closed to the general public – you can only walk around the perimeter.
But you can walk through the stones of Avebury Henge, Britain’s largest prehistoric stone circle, and even touch them. It’s far less touristy than its neighbor Stonehenge, and pretty much as old. Many visitors believe it is the best bet of the two, although purists know many of the stones have been moved from their original places. 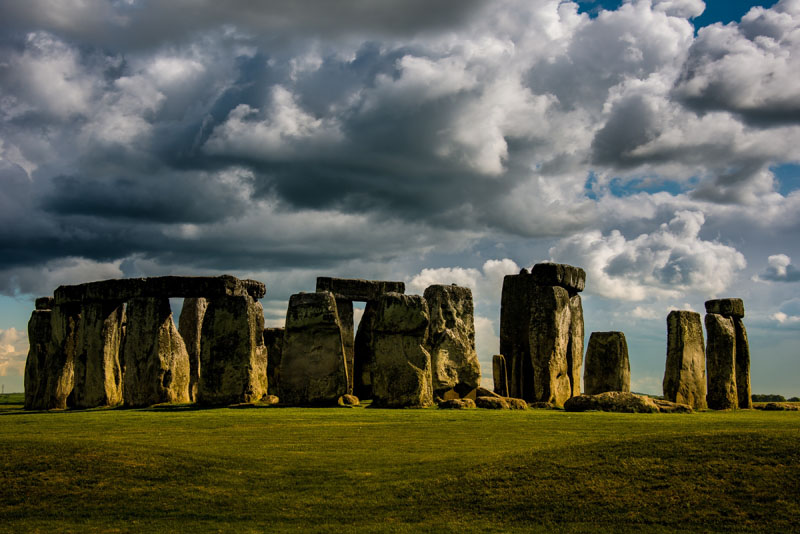 The stones we see today represent Stonehenge in ruin. Many of the original stones have fallen or been removed by previous generations for home construction or road repair. There has been serious damage to some of the smaller bluestones resulting from close visitor contact (prohibited since 1978) and the prehistoric carvings on the larger sarsen stones show signs of significant wear. 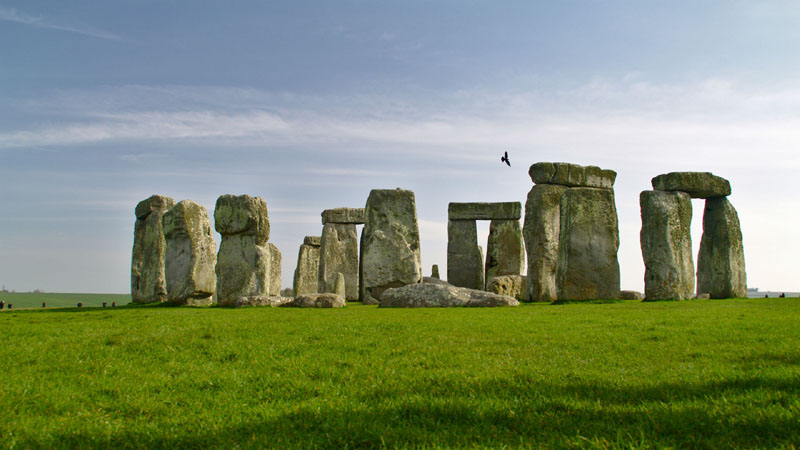 Construction of the Henge
In its day, the construction of Stonehenge was an impressive engineering feat, requiring commitment, time and vast amounts of manual labor. In its first phase, Stonehenge was a large earthwork; a bank and ditch arrangement called a henge, constructed approximately 5,000 years ago. It is believed that the ditch was dug with tools made from the antlers of red deer and, possibly, wood. The underlying chalk was loosened with picks and shoveled with the shoulderblades of cattle. It was then loaded into baskets and carried away. Modern experiments have shown that these tools were more than equal to the great task of earth digging and moving. 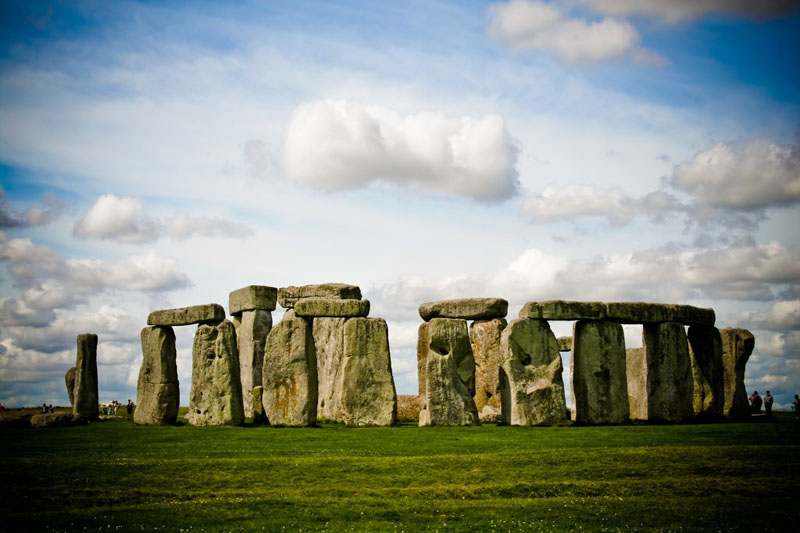 The Bluestones
About 2,000 BC, the first stone circle (which is now the inner circle), comprised of small bluestones, was set up, but abandoned before completion. The stones used in that first circle are believed to be from the Prescelly Mountains, located roughly 240 miles away, at the southwestern tip of Wales. The bluestones weigh up to 4 tons each and about 80 stones were used, in all. Given the distance they had to travel, this presented quite a transportation problem. 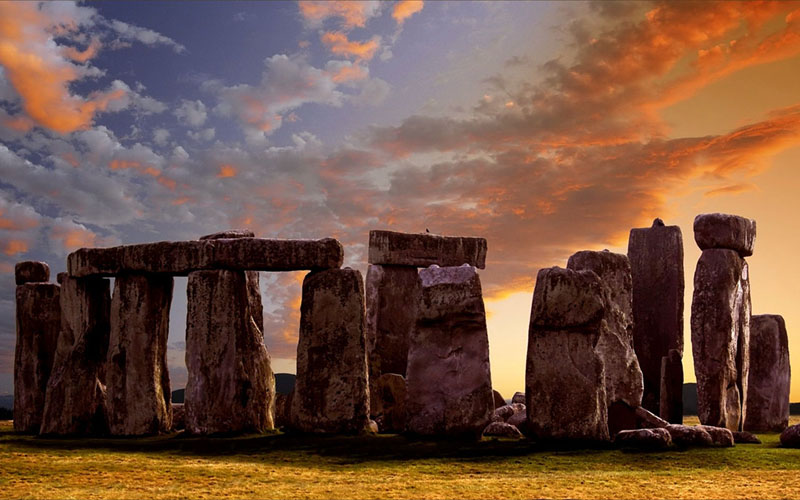 Modern theories speculate that the stones were dragged by roller and sledge from the inland mountains to the headwaters of Milford Haven. There they were loaded onto rafts, barges or boats and sailed along the south coast of Wales, then up the Rivers Avon and Frome to a point near present-day Frome in Somerset. From this point, so the theory goes, the stones were hauled overland, again, to a place near Warminster in Wiltshire, approximately 6 miles away. From there, it’s back into the pool for a slow float down the River Wylye to Salisbury, then up the Salisbury Avon to West Amesbury, leaving only a short 2 mile drag from West Amesbury to the Stonehenge site. 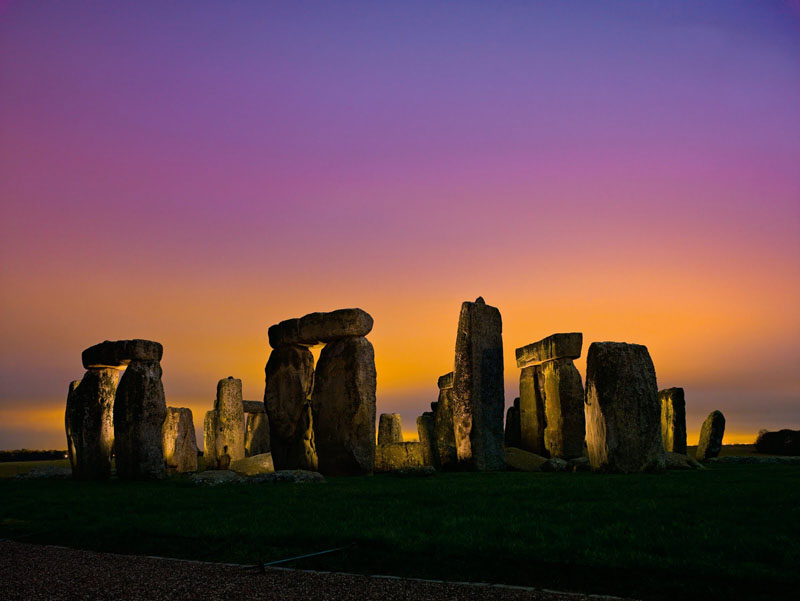 Construction of the Outer Ring
The giant sarsen stones (which form the outer circle), weigh as much as 50 tons each. To transport them from the Marlborough Downs, roughly 20 miles to the north, is a problem of even greater magnitude than that of moving the bluestones. Most of the way, the going is relatively easy, but at the steepest part of the route, at Redhorn Hill, modern work studies estimate that at least 600 men would have been needed just to get each stone past this obstacle.

Once on site, a sarsen stone was prepared to accommodate stone lintels along its top surface. It was then dragged until the end was over the opening of the hole. Great levers were inserted under the stone and it was raised until gravity made it slide into the hole. At this point, the stone stood on about a 30° angle from the ground. Ropes were attached to the top and teams of men pulled from the other side to raise it into the full upright position. It was secured by filling the hole at its base with small, round packing stones. At this point, the lintels were lowered into place and secured vertically by mortice and tenon joints and horizontally by tongue and groove joints. Stonehenge was probably finally completed around 1500 BC. 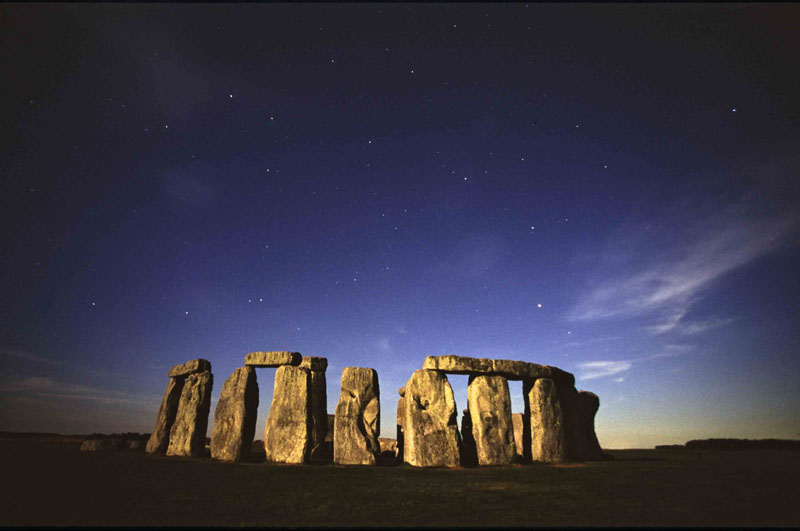 Who Built Stonehenge?
The question of who built Stonehenge is largely unanswered, even today. The monument’s construction has been attributed to many ancient peoples throughout the years, but the most captivating and enduring attribution has been to the Druids. This erroneous connection was first made around 3 centuries ago by the antiquary, John Aubrey. Julius Caesar and other Roman writers told of a Celtic priesthood who flourished around the time of their first conquest (55 BC). By this time, though, the stones had been standing for 2,000 years, and were, perhaps, already in a ruined condition. Besides, the Druids worshipped in forest temples and had no need for stone structures. 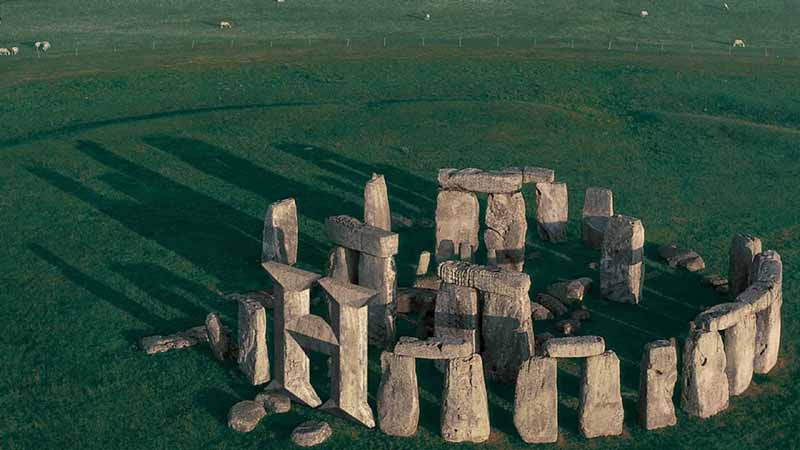 The best guess seems to be that the Stonehenge site was begun by the people of the late Neolithic period (around 3000 BC) and carried forward by people from a new economy which was arising at this time. These “new” people, called Beaker Folk because of their use of pottery drinking vessels, began to use metal implements and to live in a more communal fashion than their ancestors. Some think that they may have been immigrants from the continent, but that contention is not supported by archaeological evidence. It is likely that they were indigenous people doing the same old things in new ways. 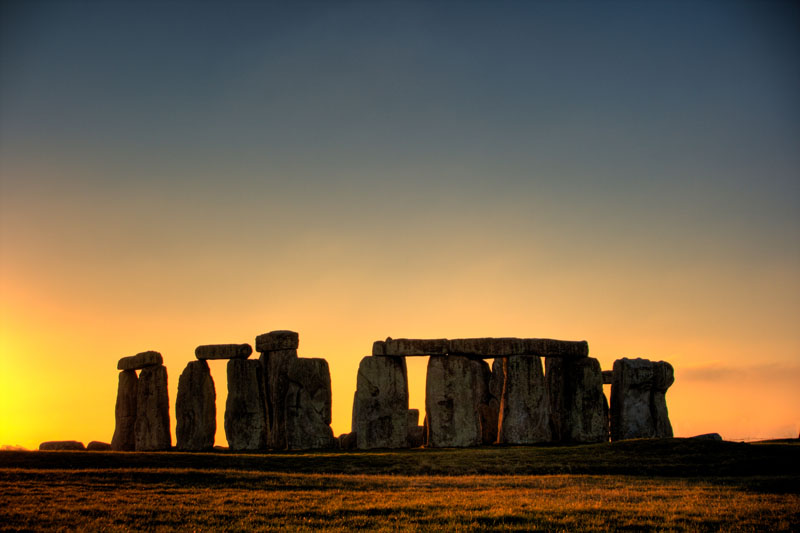 As Legend Has It
The legend of King Arthur provides another story of the construction of Stonehenge. It is told by the twelfth century writer, Geoffrey of Monmouth, in his History of the Kings of Britain that Merlin brought the stones to the Salisbury Plain from Ireland. Sometime in the fifth century, there had been a massacre of 300 British noblemen by the treacherous Saxon leader, Hengest. Geoffrey tells us that the high king, Aurelius Ambrosius, wanted to create a fitting memorial to the slain men. Merlin suggested an expedition to Ireland for the purpose of transplanting the Giant’s Ring stone circle to Britain. According to Geoffrey of Monmouth, the stones of the Giant’s Ring were originally brought from Africa to Ireland by giants (who else but giants could handle the job?). 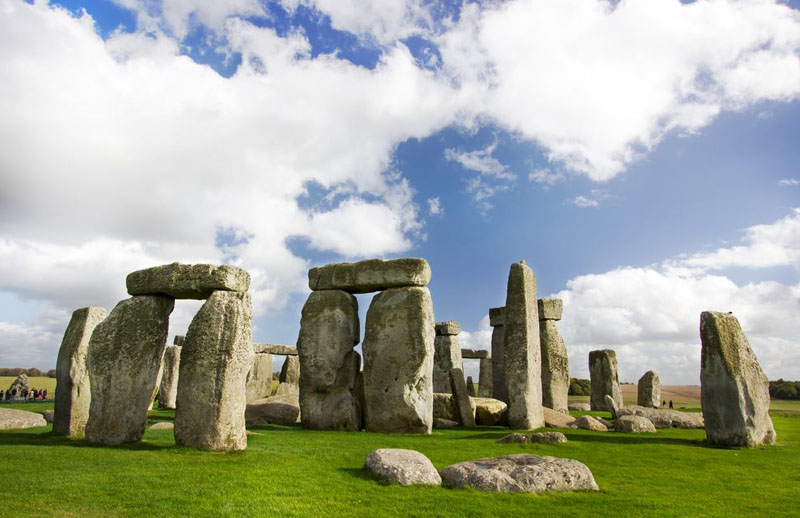 The stones were located on “Mount Killaraus” and were used as a site for performing rituals and for healing. Led by King Uther and Merlin, the expedition arrived at the spot in Ireland. The Britons, none of whom were giants, apparently, were unsuccessful in their attempts to move the great stones. At this point, Merlin realized that only his magic arts would turn the trick. So, they were dismantled and shipped back to Britain where they were set up (see illus. at right) as they had been before, in a great circle, around the mass grave of the murdered noblemen. The story goes on to tell that Aurelius, Uther and Arthur’s successor, Constantine were also buried there in their time. 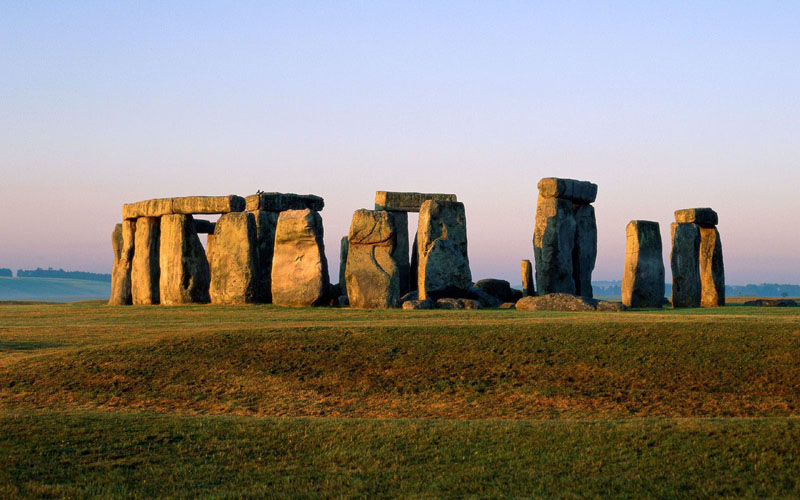 Present Day Stonehenge
Situated in a vast plain, surrounded by hundreds of round barrows, or burial mounds, the Stonehenge site is truly impressive, and all the more so, the closer you approach. It is a place where much human effort was expended for a purpose we can only guess at. Some people see it as a place steeped in magic and mystery, some as a place where their imaginations of the past can be fired and others hold it to be a sacred place. But whatever viewpoint is brought to it and whatever its original purpose was, it should be treated as the ancients treated it, as a place of honor. 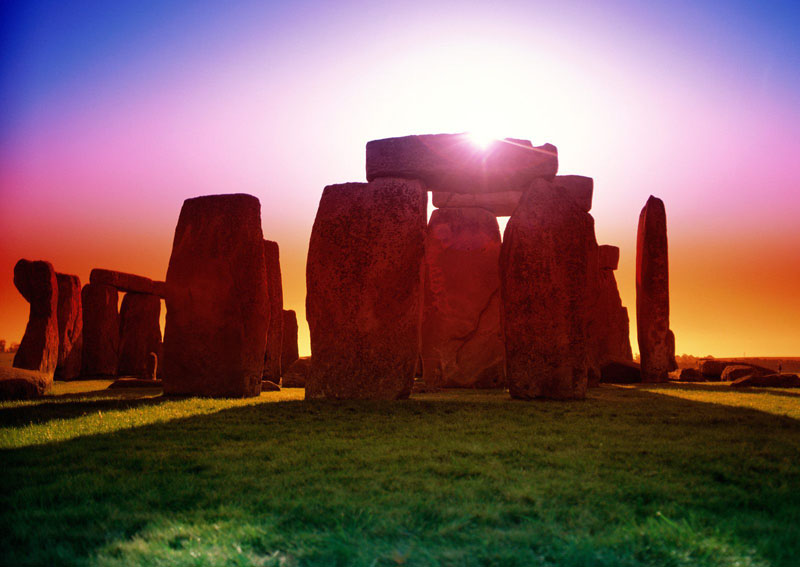 The modern age has not been altogether kind to Stonehenge, despite the lip service it pays to the preservation of heritage sites. There is a major highway running no more than 100 yards away from the stones, and a commercial circus has sprung up around it, complete with parking lots, gift shops and ice cream stands. The organization, English Heritage, is committed to righting these wrongs, and in the coming years, we may get to see Stonehenge in the setting for which it was originally created. Despite all its dilapidation and the encroachment of the modern world, Stonehenge, today, is an awe-inspiring sight, and no travel itinerary around Britain should omit it.

One thought on “Stonehenge – The greatest unexplained site of Europe”