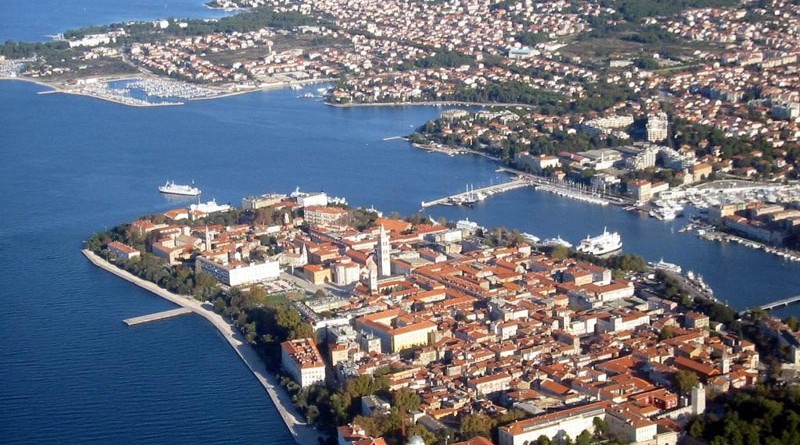 Zadar is an ancient city, built in the center of the Croatian Adriatic, full of historical and cultural monuments. It is three thousand years old, a city of old, tumultuous and dynamic history, often destructed, looted, devastated, every time emerging from the ruins stronger, richer and more beautiful. 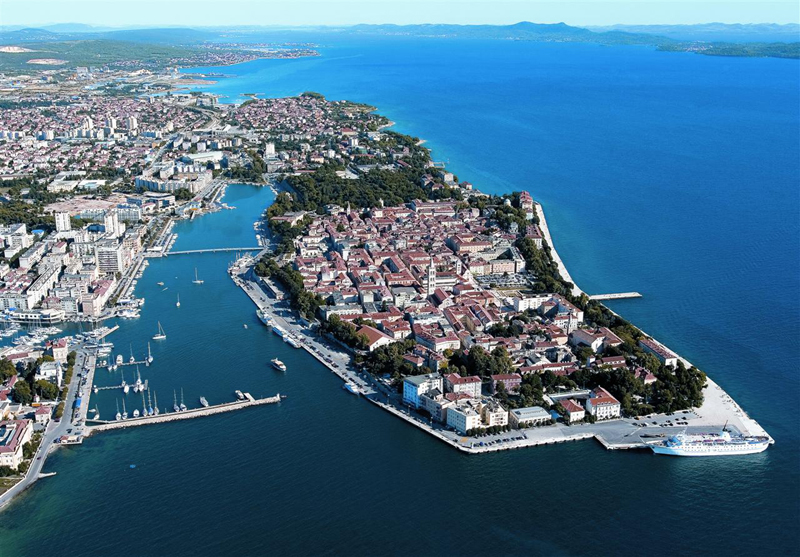 Zadar appeared for the first time in history in the 4th century B.C. as a settlement of the Illyrian tribe of Liburnians – the name Jader was mentioned, and through history it changed into Idassa (Greek source), Jadera (Roman source), Diadora, Zara (during Venetian rule and later Italian) up to today’s name of Zadar. 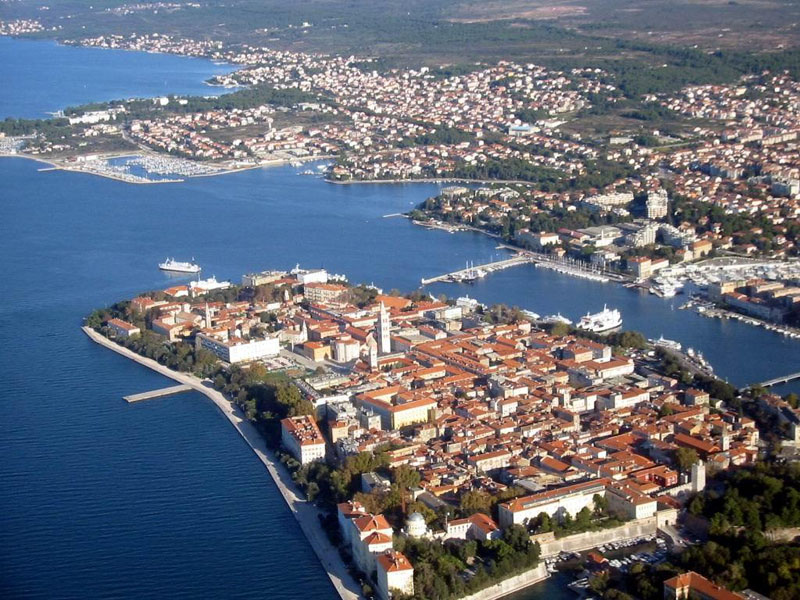 After the year 59 B.C. Zadar became a Roman municipium, and in 48 B.C. a colony of Roman citizens. During Roman rule Zadar acquired the characteristics of a city with a regular road network, a main square – forum, and next to it an elevated capitolium with a temple. 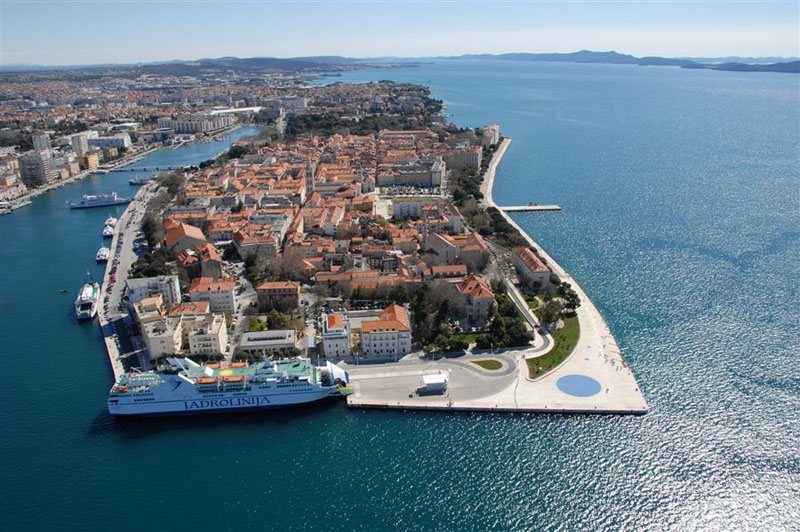 In the 7th century Zadar became the center (capital) of the Byzantine theme (province) of Dalmatia. At the beginning of the 9th century Zadar was mentioned as seat of bishop Donatus and the Byzantine leader Paulus. At the time a church was erected on the Roman forum, the church of the Holy Trinity, today St. Donat, for which it can be said to be the symbol of the city.
Larger settling of Croats in Zadar was marked in the 10th century. The foundations of the Romanesque church of St. Mary, the church of St. Grisogone and the cathedral of St Anastasia have been preserved from that period. 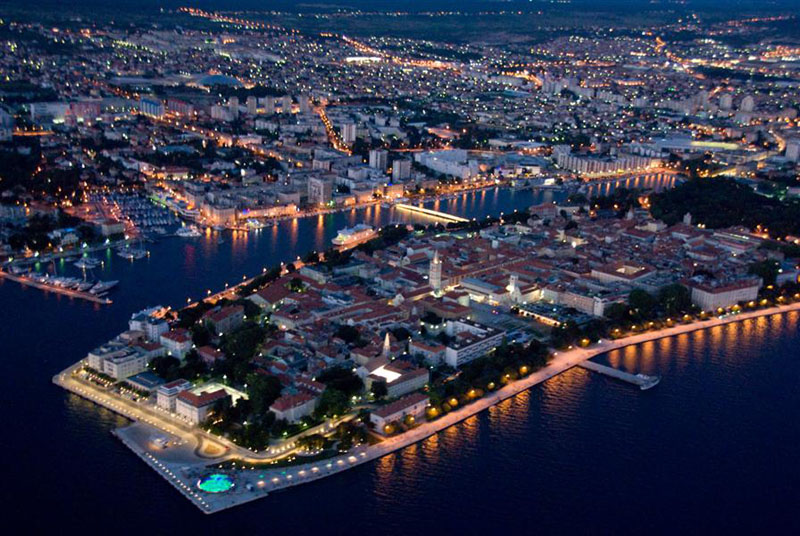 In 1202 the city was conquered and burned by the Crusaders and Venetians. The first Gothic churches in Dalmatia, St. Francis and St. Dominic, were built after that time, and the gold-plated silver sarcophagus of St. Simeon must be distinguished among the treasures of the period.
The 15th and 16th centuries are characterized by significant activities of Croatian writers who wrote in the national Croatian language (Petar Zoranić, Brne Krnarutić, Šime Budinić, Jerolim Vidulić …). 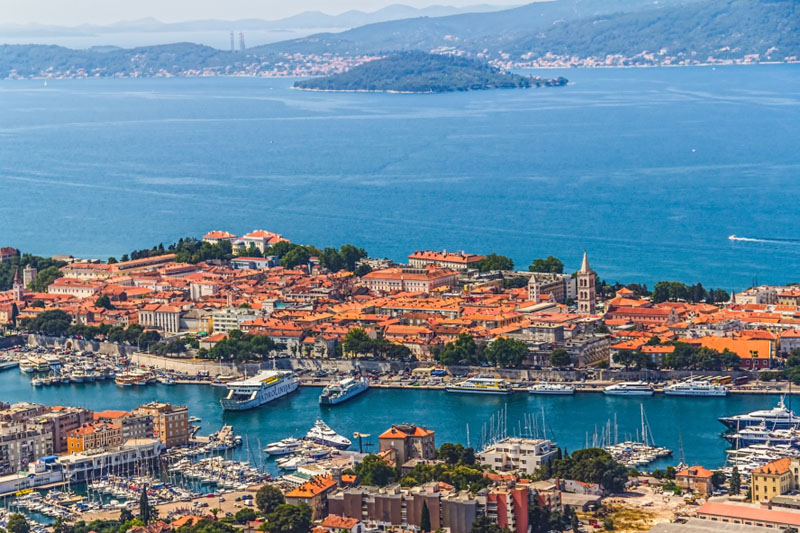 The Austrians (1797) took over the government of Zadar after the Venetians, to be followed by the French (from 1806 to 1813). After a short time of French rule, Zadar remained under Austrian rule until 1918. With the Treaty of Rapallo, Zadar fell under Italian rule, and after the II World War it was annexed to Croatia (within the framework of the Federation of Yugoslavia). 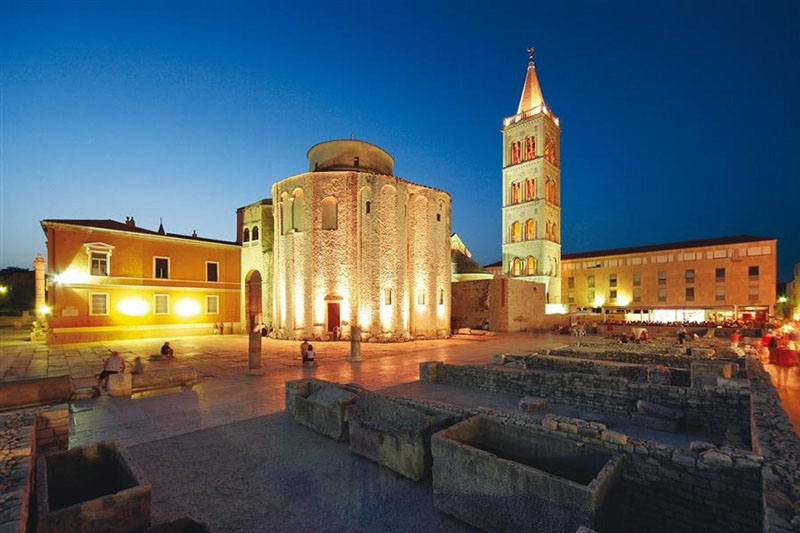 Following the Republic of Croatia’s declaration of independence and subsequent Serbian aggression on Croatian territory, Zadar and its surroundings were attacked in October 1991. The Serbian rebels aimed to conquer and destroy the city and its region, attacking with a destructive force that had never been seen so far. Zadar’s hinterland was controlled by rebels and significantly devastated. The city itself was repeatedly targeted and cultural heritage of Zadar was heavily damaged.
Today Zadar is a preserved monument of various historical times and cultures that have placed their boundaries and visible outlines of their urban appearance. 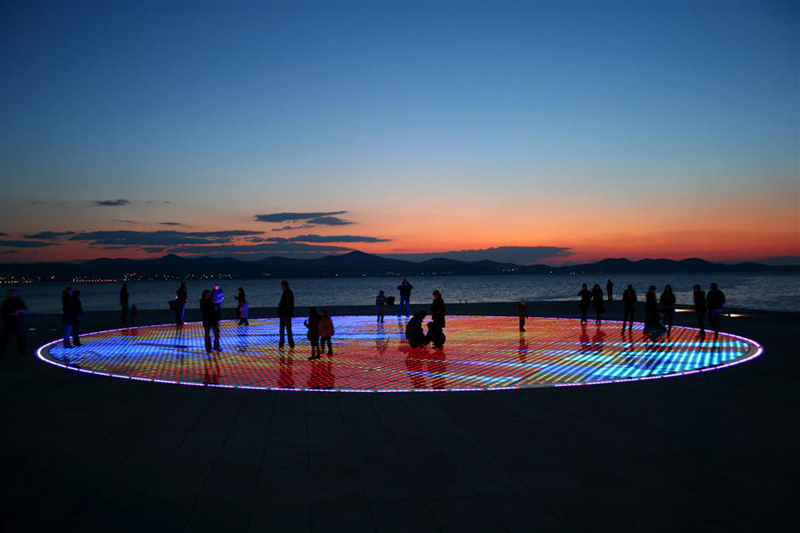 During its existence it was for many centuries the home of the Ilyrian Liburni and for 1000 years the capital city of Dalmatia. Rich in history, it is curently a focal point in civilisation, and most of all city with an unquestionable future: its accepted concept of development into an international, Mediterranean and Adriatic metropolis is being realised. It is a city with a rich Croatian national identity created in the present, wich successfully adheres to the newest trends in globalisation and informatisation. 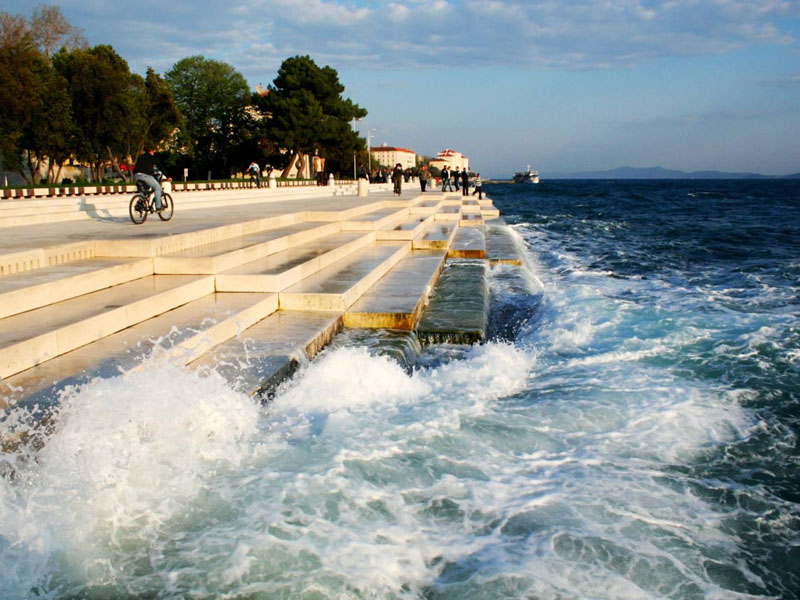 Zadar is a city rich in spirutual and material culture, as well as in a touristic identity created in the present. It was created around the Roman forum, a city inside well-kept walls, a city of old Croatian monuments. Full of archieves, museums and libraries, it is the keeper of literary and musical treasure, it is the city inside with the oldest University among Croatians (1396). It was long ago the place where the first Croatian novel and the first newspapers in the Croatian language were created. It is protected by four guardian saints: Zoilo, Simon, Grisogone and Anastasia.
The city of Zadar is situated in the heart of the Adriatic and it is not just an urban centre of northern Dalmatia but with its administrative, economic, cultural and political importance it constitutes the centre of the region with almost 92.000 inhabitants. 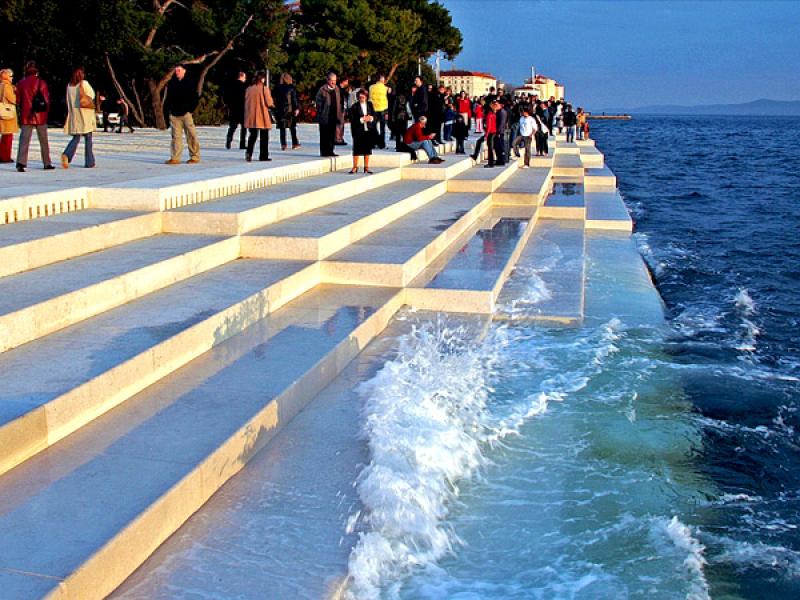 Zadar is the centre and the watershed of the Croatian Adriatic. Placed on the Mediterranen diagonal of Europe and on the Adriatic-Ionic joining point, as close to the Croatian metropolis Zagreb as to the rest of the cities is in constant natural and circulatory communication with city Ancona on the Italian side of the Adriatic.
It is made well-accessable by high-quality and comfortable road, air, see and railroad travel. Rich in attractions, exceptional in material and spirutual culture, strong in sailing, original in tourism, it is well developed and special.
Having its natural position in the conjuction of geographically different Croatian regions, being surrounded by the historical towns such as Nin, Pag, Biograd, Obrovac, Benkovac and many others, the city is an easily accessible and attractive destination to visitors from all over the world, whether by sea, land or air. 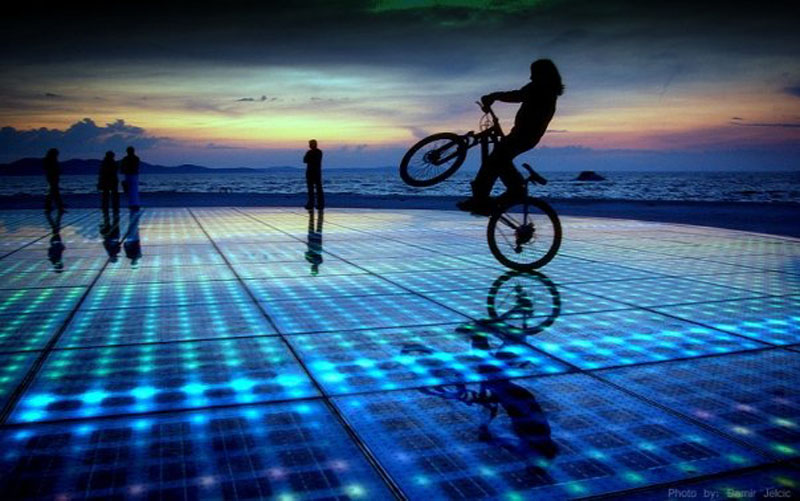 An exceptionally indented coast, islands and untouched nature attract many boaters and sailors to this exact area. The archipelago which consists of 24 bigger and as 300 little islands and rocks, 3 nature parks – Telašćica, Northern Velebit and Vransko Lake as well as 5 national parks – Paklenica, Plitvice, Kornati, Krka and Velebit, rank Zadar and its surronndings on the top of the Croatian tourist offer.
Thanks to its geographical position, Zadar has a mild Mediterranean climate (warm and dry summers, and mild and rainy winters) which is reflected in a beautiful Mediterranean vegetation with occasional exotic subtropical specimen in the Zadar city parks. The average air temperature during the summer is 25ºC, during the winter 7ºC, while the average summer temperature of the sea reaches 23ºC.